As a Renaissance town with a rich heritage, Florence is full of secrets, urban legends, fun facts, and the list goes on. Although it’s easy to get fascinated by the city’s main attractions, there are so many details that go unnoticed. Read on if you want to find out these fun facts about Florence Italy!

Florence can be a challenging city to navigate. Get where you need to go stress-free - schedule a Prontopia local assistant to help you! 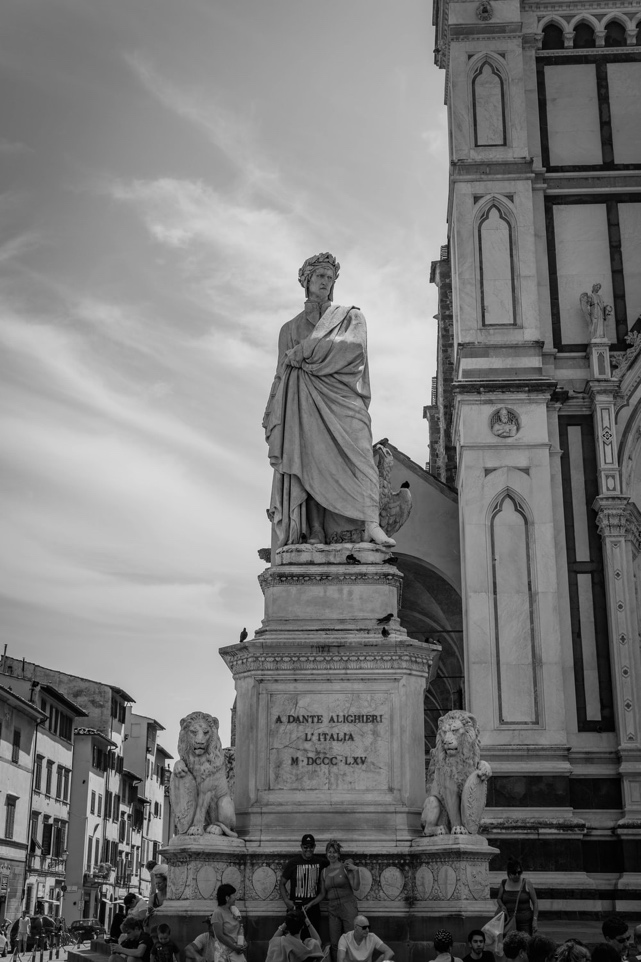 The legend of Berta

The first of our fun facts about Florence Italy is that on the side façade of the Church of Santa Maria Maggiore, you can see a marble head nestled in the stone wall, also known by the Florentines as Berta. According to the legend, that head has been there since 1327, when the astrologer Cecco d'Ascoli, who was condemned to the stake for witchcraft, made a deal with the devil. Anyone who offered him water would have saved his life. It seems that Berta looked out of her window and, once Cecco asked her for some water, she denied it to him. Therefore, he put a curse on her, petrifying her on the spot. According to another legend, the head is a portrait commemorating a groceries seller who had her stall in that very spot. She gifted the city with a bell that, marked the opening and closing of Florence's gates with its tolls.

When architect Baccio D’Agnolo designed the Bartolini Salimbeni Palace in 1532, he was strongly criticised by his contemporaries due to its return to the classical style. In order to take revenge, he had the Latin writing ‘criticising is easier than imitating’ (caprere promptius quam imitari) etched on the front gate beam. Subliminal messages were also etched on the palace windows, such as ‘to avoid sleeping’ (per non dormire), though this was the family Bartolini Salimbeni’s decision as an invitation to work hard.

At the entrance of the St John’s Baptistry, you can see a white marble column with a cross on top and a bronze elm tree half way through it. According to the legend, as Saint Zenobi’s relics were being transferred from San Lorenzo to Santa Reparata, they hit an elm tree, which lay dead on the path. Suddenly, the elm tree came back to life; this was seen as a miracle.

The guardians of the river Arno

Though it’s quite hard to spot them, on both sides of the Santa Trinita bridge arches, you can spot some huge ram faces. These are the so-called ‘guardians of the river Arno’; on Ponte Vecchio side, they would protect the river Arno from floods coming from the Arezzo area, while on the Ponte alla Carraia side, they would protect the city from foreign enemies climbing the Arno upstream. 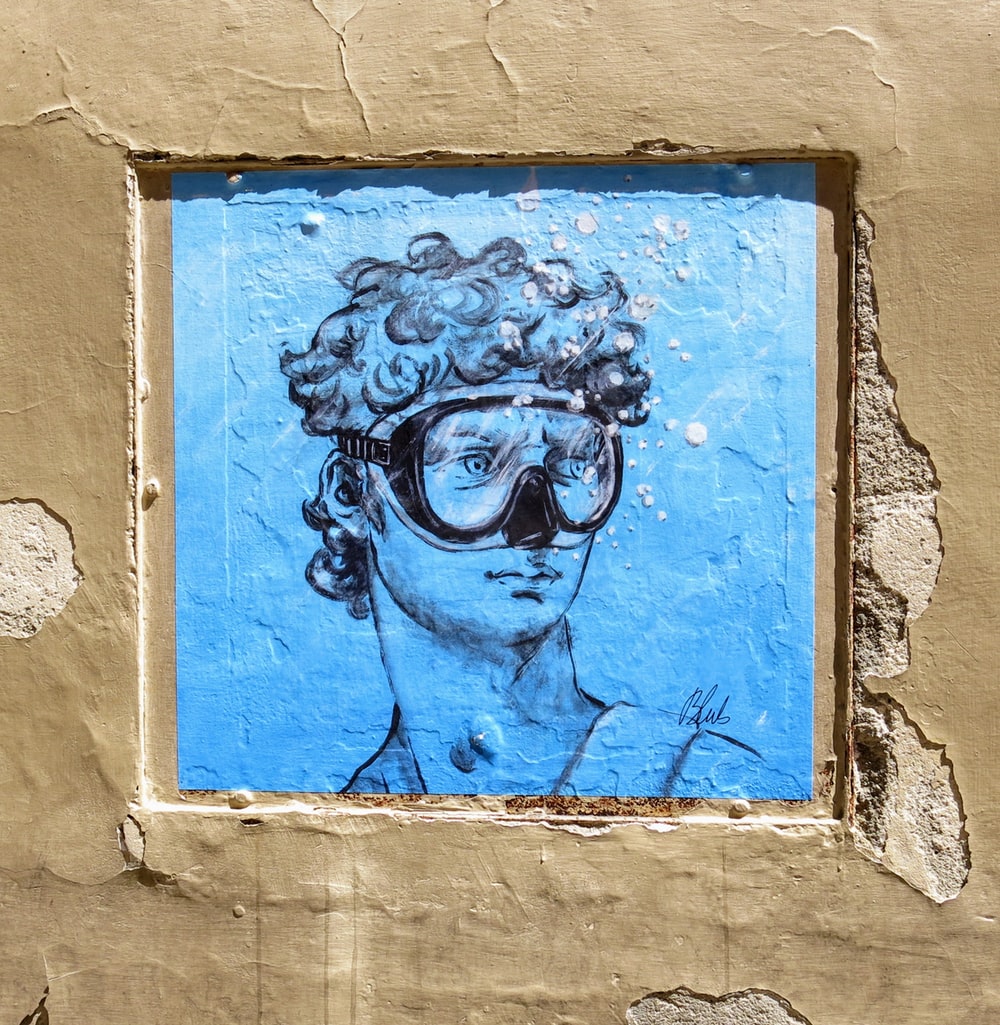 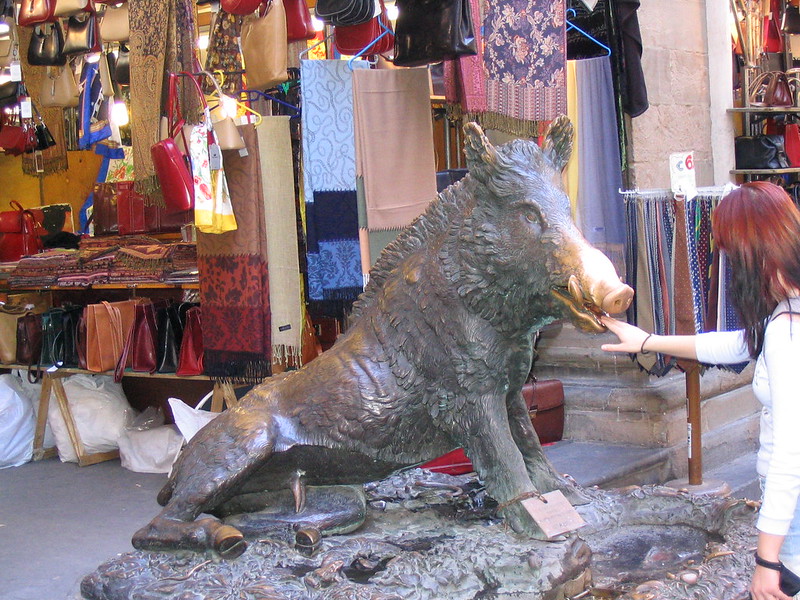 This statue of a bronze piglet by Pietro Tacca is a copy of the marble statue that was donated to Cosimo I Medici in the 16th century and that is now at the Uffizi, is situated under the New Market lodge. In the 17th century, it was modified into a fountain for silk merchants who worked underneath it. Today, you can slip a coin in the piglet's mouth and hope it will fall in the grid underneath, then touch its nose as a lucky charm, or simply caress its nose, and it will bring you good luck.

If you go to the Loggia dei Lanzi in Piazza Signoria and walk around Benvenuto Cellini’s Perseus statue, you’ll notice that the sculptor played a trick on the viewer: indeed, the helmet on Perseus’s head is also a smirky self-portrait.

Inside the chapel of Santa Margherita dei Cerchi Church, also known as Dante Alighieri and Beatrice Portinari's church, you can find Beatrice's tomb, where you can leave love promises and cards. Indeed, the church is where it seems that Dante and Beatrice exchanged romantic looks.

Since the beginning of time, Piazza Signoria has been Florence's base. In 1498, Dominican Father Girolamo Savonarola was hung and burned at the stake for heresy there. Until today, a commemorative stone lays before Neptune's fountain, also known as the Fontana del Biancone (Fountain of the big white) due to Neptune's white big statue.

Sundial at the Science Museum

The last of our fun facts about Florence Italy is that not all of Florence’s secrets come from the Renaissance. Indeed, in 2008, a 6-meter tall sundial was installed outside the Science Museum. At the basis of the bronze column is a wind rose, and on the sundial is a mini sundial in the form of a lizard whose tail points to the peak reached by the sun. On the tiles before the sundial lay symbols of the 12 zodiac signs as well as symbols of the summer and winter solstices.