While exploring the city of Barcelona you are bound to encounter creative buildings and innovative façades that are so unique you’ll think you dreamt them up. The capital of Cataluña is inextricably linked to Antonio Gaudi: architect, visionary, and trailblazer. Today we’re taking a moment to spotlight the architect and discuss some of his most noteworthy projects in Barcelona. From the awe-inspiring interior of La Sagrada Familia to the mosaic wonderland of Park Güell, there’s never a dull view when walking in the footsteps of Gaudi.

Barcelona can be a tough city to navigate - consider booking a Prontopia Local Assistant for in-person help and recommendations for your next adventure!

Who Was Antonio Gaudi?

Antonio Gaudí (1852-1926) was a Spanish architect, known for his innovative approach to Art Nouveau and striking modernist designs, which were heavily inspired by nature. Born in 1852 in Reus, Spain, on the coast of Catalonia, he learned much about working with his hands and understanding volume thanks to his father and grandfather who were boilermakers.

At the age of 18, he moved to Barcelona, the most futuristic city in Spain at the time, to study architecture. He was a subpar student and during his graduation ceremony the school director is even quoted as having said, “We awarded the diploma to a madman or a genius. Time will tell.”  Sure enough, it did.

Gaudí immediately began working in the field of architecture, designing the lamp posts in the Plaza Real off of Las Ramblas and then working on his first big project, Casa Vicens. Throughout his career, he continually made use of brilliant color, mosaics, the floating balcony, intricate texture, and nature-inspired symbolism.

He was passionate about his Catalan culture, won the praise of fellow surrealist Salvador Dalí, never married, and at the end of his life was a devout Catholic. The Sagrada Familia is considered his masterpiece although the majority of the basilica was constructed posthumously. He died just shy of age 74, after being struck by a tram while crossing the street near The Sagrada Familia. Due to his shabby appearance, pedestrians and onlookers thought he was a beggar and by the time he was recognized it was too late to save him.

Below are some of the most famous works of Gaudí, which you must put on your itinerary for your next trip to Barcelona.

Read Next: Best Free Things To Do In Barcelona 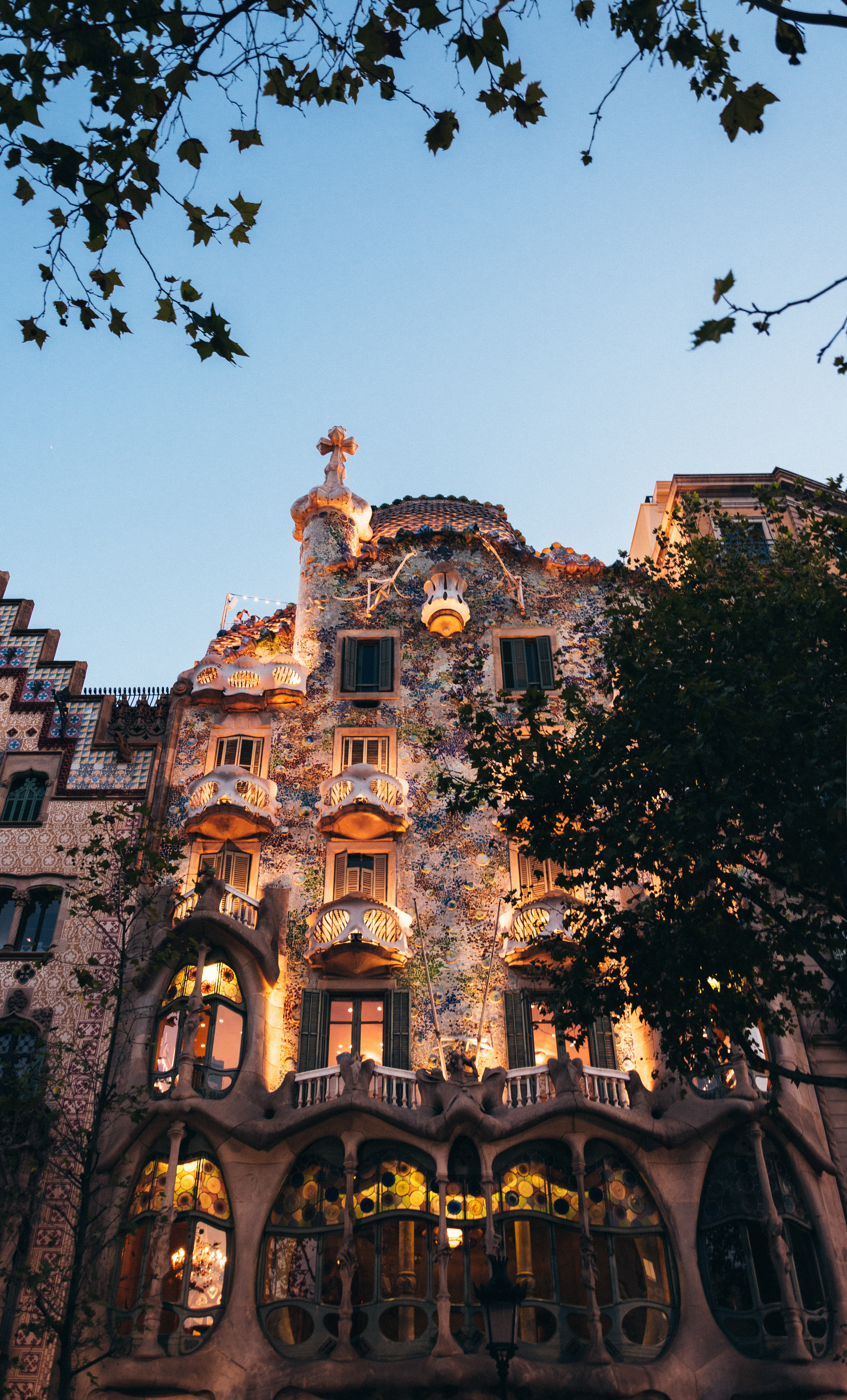 Photo by Theodor Vadile on Unsplash

A building that looks just like nothing you’ve ever seen before. Gaudí was chosen by a prominent businessman, Josep Batlló, for the project and given free creative reign over its trajectory. The building was originally to be demolished and rebuilt, but Gaudí decided to simply alter it. And alter it he did. The exterior is an explosion of color and texture. Inspired by marine life, it incorporates stone, glass, recycled materials, and a roof that resembles the scales of a would-be technicolor fish. The inside is just as artistic and innovative, and over one million tourists flock to the location to see this example of pure imagination every year. 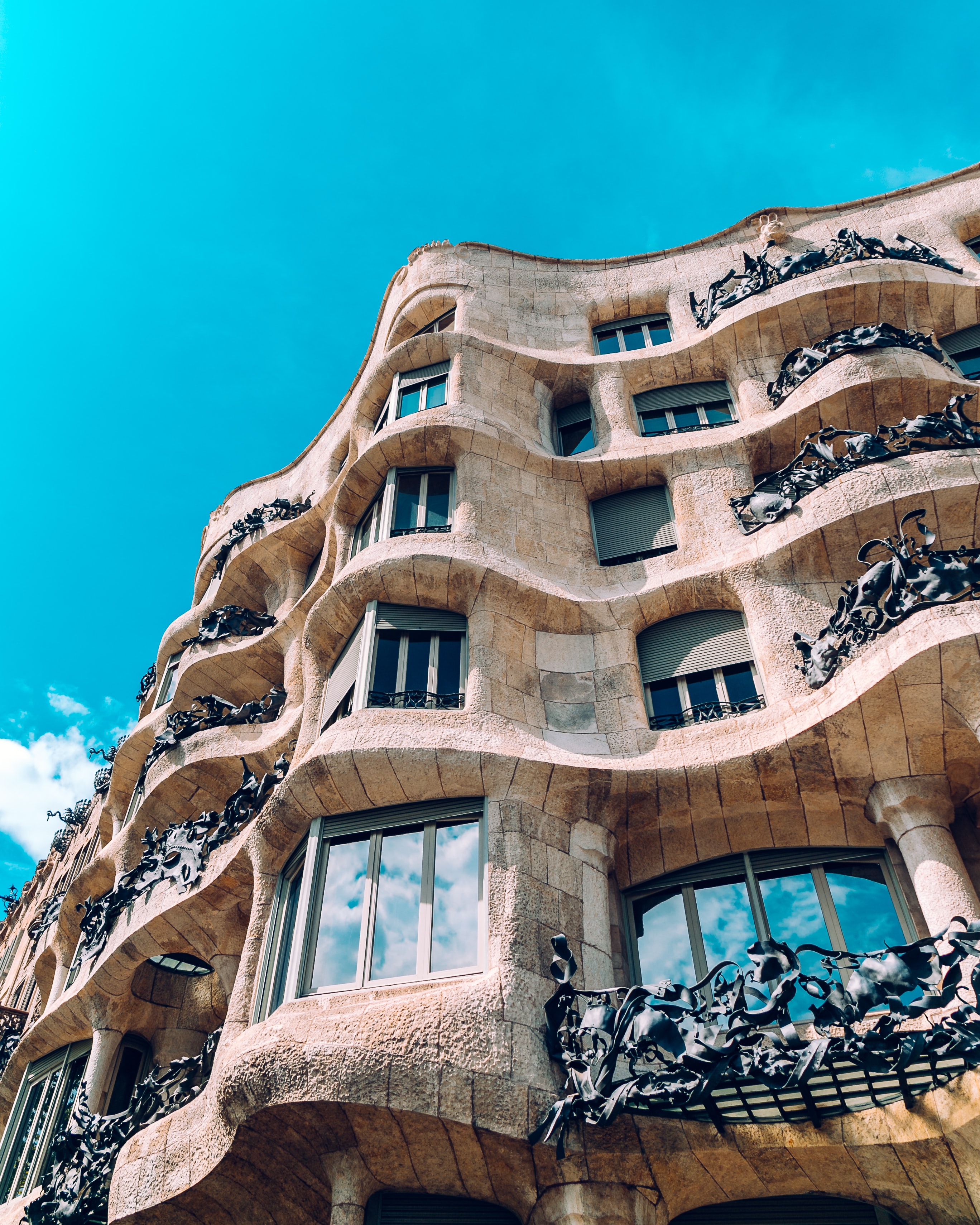 Photo by Florencia Potter on Unsplash

Gaudí was commissioned by the Milà family to design Casa Milà, also known as “La Pedrera,” or “the stone quarry,” in Catalan. The building is characterized by an undulating facade and one of the most iconic terraces of the city, featuring sculptural chimneys and quirky air vents. It’s one of the only three residential buildings he designed in his lifetime along with Casa Batllò and Casa Calvet. When it was built, it was actually ridiculed by some civilians and mocked in a satirical newspaper. Now it's a UNESCO World Heritage Site.

Read next: What to Eat in Barcelona, Spain 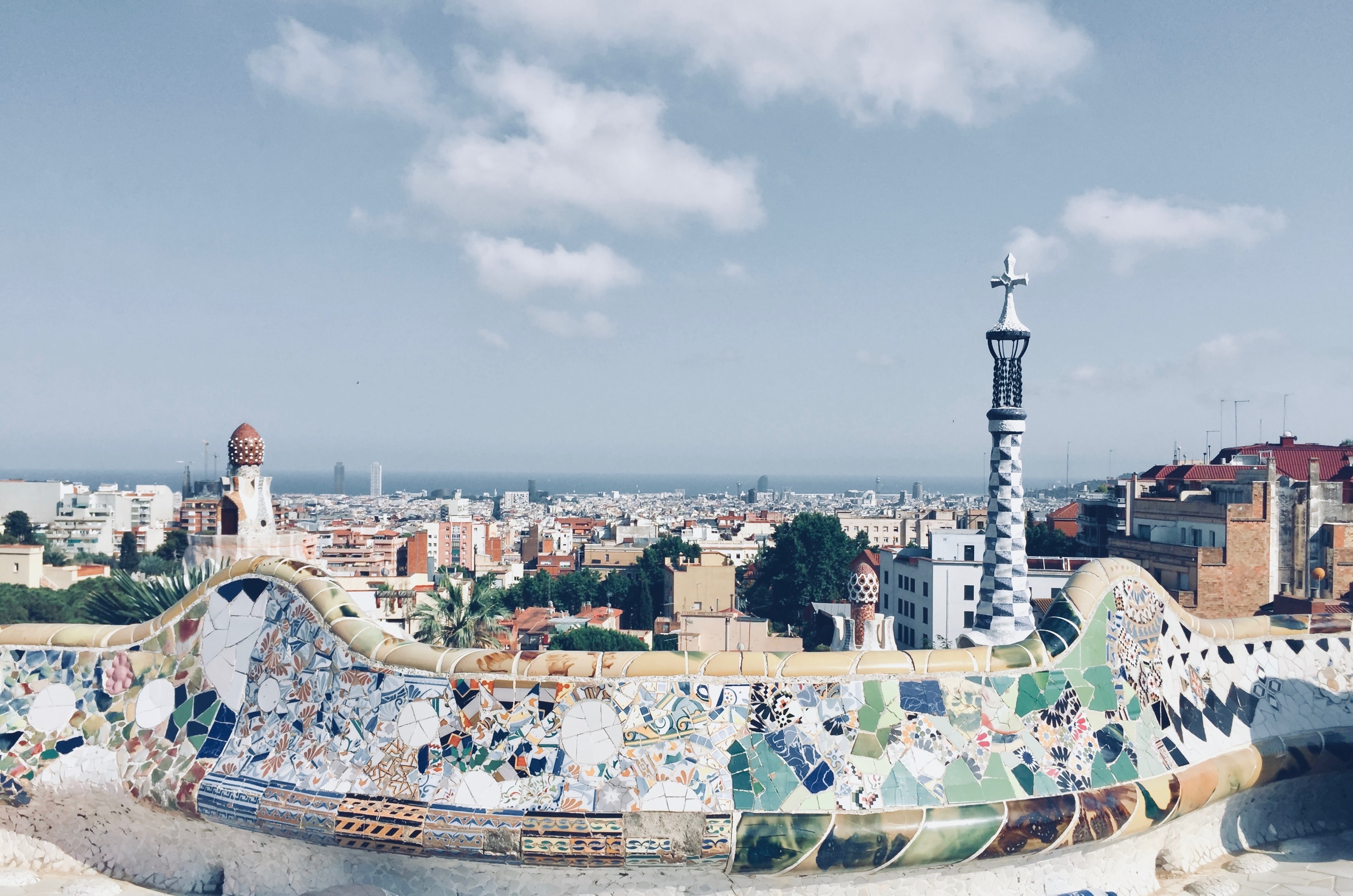 Photo by Vitor Moteiro on Unsplash

If you’ve ever wondered where people are when they take those breathtaking shots on a vibrant ceramic bench in front of a panoramic view of Barcelona, it’s gotta be Park Güell. Originally developed as a luxe estate with about 60 plots of land for wealthy families, it has been a public park since 1926. While working on the project, Gaudí had to work with height requirements so as not to restrict the view of the city and could only build on one-sixth of the land. Today the park features a splendid set of steps where a large ceramic lizard, now a symbol of Barcelona, sits perched to greet tourists. A mixture of gardens and architectural elements, Park Güell is a must-see, although booking ahead of time is required for full access to the park. Gaudí himself even moved to a little house in the park which is now a museum. 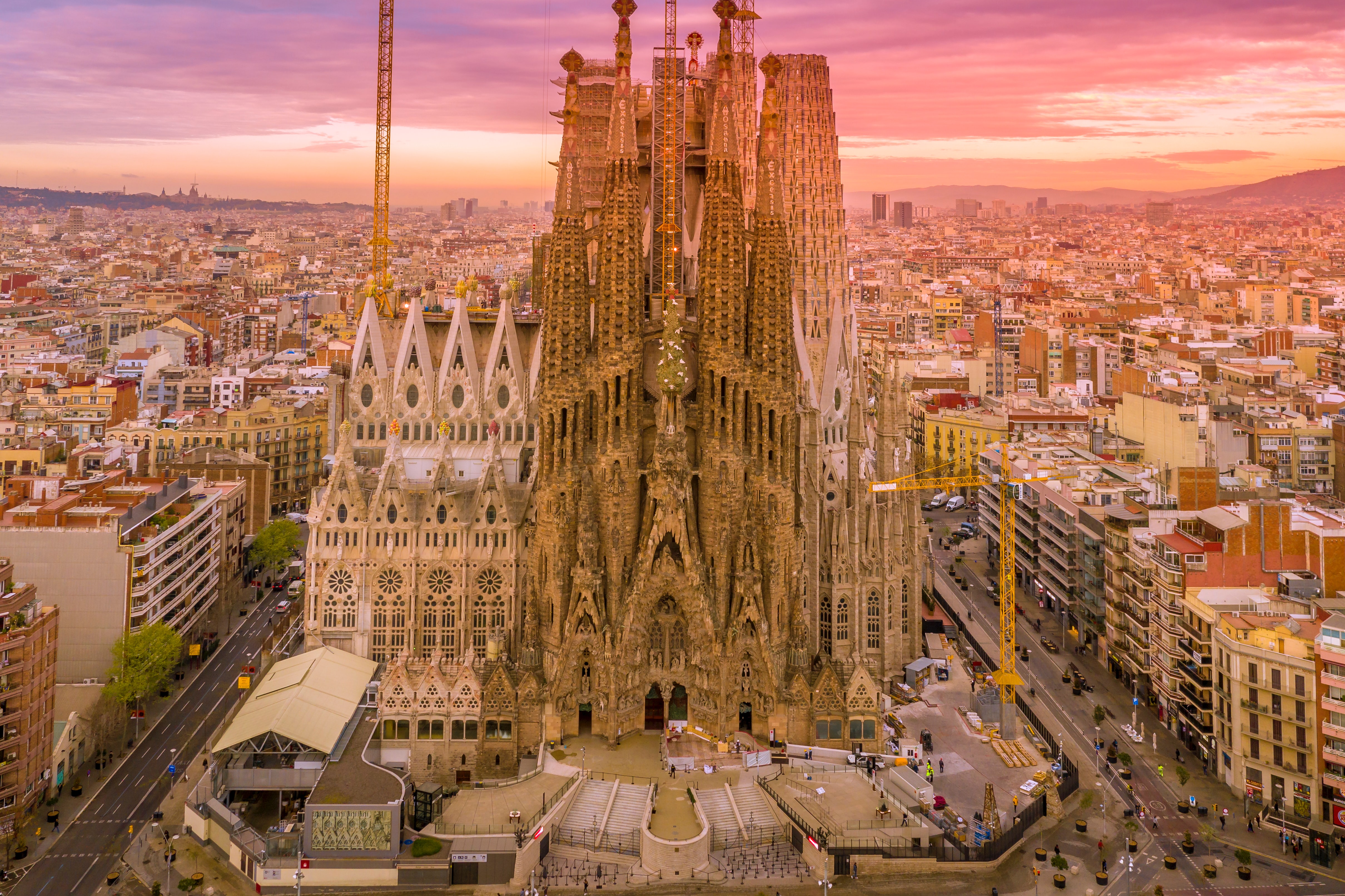 Photo by Ken Cheung on Unsplash

Gaudí’s masterpiece, La Sagrada Familia (The Sacred Family), is to Barcelona what the Eiffel Tower is to Paris. It’s a symbol of the city and although the cornerstone was laid in 1882, the building is still unfinished. Construction is expected to be completed in 2026 on the hundred-year anniversary of Guadí’s death. Upon completion, the exterior will have eighteen towers. Twelve of them represent the apostles, four represent the evangelists, one is dedicated to the Virgin Mary and the highest one is dedicated to Jesus Christ. The tallest tower will come in at 170 meters, making La Sagrada Familia, the tallest religious building in Europe. Upon entering the basilica, you will likely feel more like you’re entering into a mystical forest - the pillars inside are sculpted to simulate trees and the stained glass windows mimic the dancing colors of nature. Gaudí is buried inside.

On your next visit to Barcelona, you’ll be sure to appreciate the wonder of the buildings and landmarks designed by the city’s most renowned architect, Antonio Gaudí. His university director wasn’t sure whether to label him as a madman or a genius, but maybe the two aren’t so mutually exclusive after all. Maybe those who see the world differently are always a bit of both.